I love LEGO since… well forever, I guess. It’s with me since early childhood days, and I passed the virus on to my son, who last year started to make his first steps with stop-motion animation. He handled my professional equipment so well, but for obvious reasons (I happen to need it for work) does not have access to it, whenever he would like to play around. That’s not ok. Since we own an iPad 2, we came up with an alternative solution we would like to share: 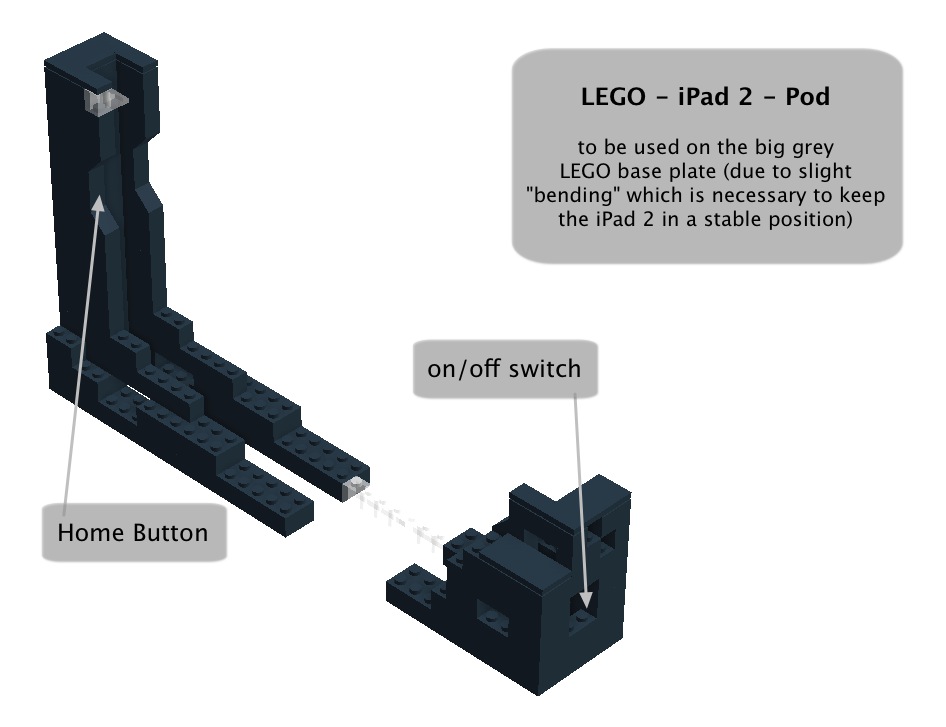 Here are the building instructions: iPad-2-Pod or in a new window/tab
Alternatively, here is the LegoDigitalDesigner-File: LDD-iPad-2-Pod (right click and „Save as“, you know)

We did also build a LEGO-3D-Rig and will post instructions and examples later this year, but first some further explanations on this one.

You don’t need to use the color I proposed, feel free to use any you have at home, and modify if you need to – by the way our original is red, not black. The „glas“-bricks at the bottom are just for orientation purposes, so that the iPad 2 fits exactly into it (the new one should fit in their as well). The space left open to comfortably reach the iPad’s home-button does not have to be on both sides – you know how it is: when you start building symmetrically, you just can’t stop… let’s say we left it that way for esthetical reasons. Customize the model on your own and at your own risk, that’s what LEGO is all about. The little „glas-brick“ at the top-right is to stabilize it. To avoid the possibility of scratching the iPad (which never happened here, and we use it heavily since a few months), remove it first, insert the iPad, than apply the brick.

I recommend to put the big grey base plate on a hard, solid surface, like a table, or maybe even better on a board, where you could fix the position of the base plate with nails. This prevents slipping of the background, the position to the lighting, and so forth.

My son uses the following applications on the iPad 2 for his animations and editing, but feel free to use whatever you want and works for you. This is just a suggestion:

The links lead to the iTunes Store, just in case you ask.

In case you haven’t downloaded the free software by Lego I mentioned above, go ahead: Lego Digital Designer You don’t need it for animations, but it’s fun to use and play around with. More on that is soon to come, too ;)

And in case you want to see all of this in action, check out my sons youtube-profile later**, which I will administrate together with him, because he is still a minor – so please be kind in case you will leave comments: LEGO-animations for the interested public. Enjoy.

* Yes, I know. As a long time Final Cut Studio user and FCP lover, it hurts to say, but it’s true. This application is better than the iMovie one, and does more. For now that is. I haven’t touched FCP X for various reasons, and I will explain in a later post, why. For now I switched to Adobe and the CS 5.5, but I still work with FCP 7 occasionally, which still works fine on the majority of jobs I do. But I still feel abandoned by the brand that got me into my first stable job 9 years ago. And yes, I also do work on the Avid, but never liked it. And I will check out Lightworks, as soon as it will be available on OS X.

** It turned out, that the above praised AVID application still can’t upload my sons first long animation – any later ones do work, but the one that he wants to post first is still trouble. When it’s done we’ll put it online with all the others. Until then, try out the iPad 2 Pod yourselves.